The biggest update yet is now free! 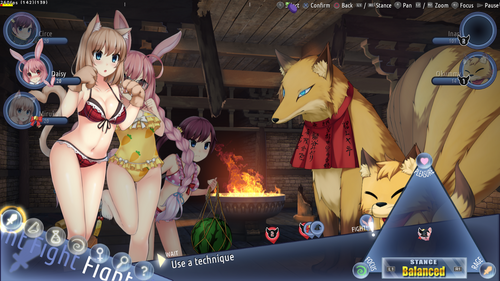 Well, it's finally here! Haremon 0.12 has been in the works for months, and it's finally ready for public release. This build is the biggest update yet, containing a big story update, several new CGs, 2 new Haremon, and more! You can download the build at the bottom of this page, and read on for a full changelog.

Buuut before we get to the changelog, here's the usual spiel: if you like the update, please consider becoming a patron. This game is entirely funded by players, and your support will be used to bring more artists, voice actresses, and other team members on board! Additionally, you'll be able to access 3 seasonal events at any time with a patron build, including Christmas, Halloween, and Valentine's Day. You can also get stuff like an mp3 soundtrack, high-res png images of the game's CGs, full debug access, and more! Go here to learn more!

- Added the "Crimson Katana" quest. This is the conclusion to the first "Chapter", and focuses on recovering Miruku's memories. It introduces 2 new dungeons (each with several new events), 3 boss fights, a new CG, and 2 new Haremon (see below). Upon completing "The Lady in Black", you will be able to access the new content by talking to Professor Laurel about Miruku's nightmare.
- Added a new Haremon: the Gargoyle. She can be encountered during The Crimson Katana
- Added another new Haremon, which I won't spoil!
- Completely reworked the witch's sex scene with an all-new CG and more expansive dialogue. The old CG is no longer in the game, but it can still be found in the Special Edition folder. If you've already unlocked her old CG, you can just have sex with her again to view the scene.
- Added a Valentine's Day sex CG, accessible between the 10-20 of February (or any time for patrons!). You can access it by completing a small quest given to you by one of your Haremon during this time. You'll also receive some unique items.
- During the Valentine's event, you also have a chance of receiving special gifts from Haremon, namely Sweets and Flowers. Additionally, Haremon are more likely to accept your offers for sex.
- Added the gargoyle's ecchi CG - Added Scarlett's ecchi CG - Added Delilah's ecchi CG
- Added many new techniques (most are for the new Haremon, but a few are for existing ones)
- Added a bunch of new kinks, obtained from new enemies and events.
- Removed the tedious, arbitrary requirement of finding a Sunflower for the monarch. She'll now join you as soon as you tame her.
- Altered some battle mechanics to make low-Fortitude Haremon less fragile
- You can now raise Annie's affection by buying items
- Added a "filter" option to the To-Do app
- You now receive a Haremon's unique panties after you have sex with her.
- Added a bunch of dialogue to each NPC's "Let's talk about..." option
- Added a hint system. You can now call Professor Laurel at any time using the Phone app and select "I need help" to get a hint pertaining to any of your active quests.
- Many other tweaks, changes, additions, and bugfixes

Combat is running super slow, about half speed compared to build 0.11.3, independently of battle speed setting. It only affects combat and slows down the menu animations as well. Please help, really wanna enjoy the new content.

I am not sure if you aware, but I found a game breaking bug. I am on third part of the sword quest (the Masturblade) and in the shadow circe fight whenever she used witch slap the game crashes. The error given if an array out of range issue. With incredible rng I should be able to get passed it but it is pretty bad. Great game though and loving it so far!

This bug is being addressed. Sorry for the inconvenience!